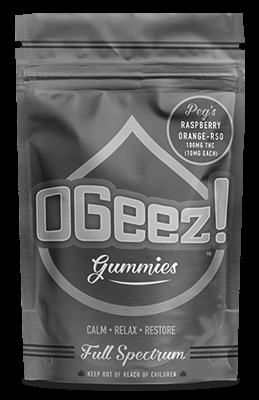 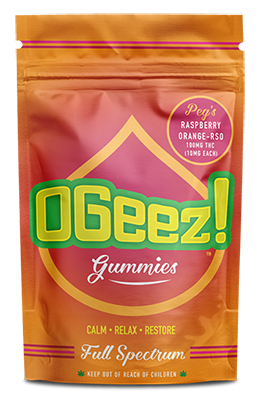 Phoenix, AZ (October 13, 2021) — OGeez! Brands, a leading Arizona-based edibles and infusion company, is unveiling a new and cutting-edge RSO gummy. The product combines the potency of RSO with the unmatched flavor of OGeez! gummies.

The new RSO gummy is debuting in Raspberry Orange and will be immediately available to dispensaries throughout Arizona.

The product launch — which is being celebrated on October 14 at the hip Phoenix event space monOrchid — comes less than a year after company founder Peggy Noonan’s death and has been named, “Peg’s Raspberry Orange RSO,” in her honor. It joins the growing family of OGeez! gummies, which currently come in six different flavors, in both indica and sativa strains.

“What really sets this product apart is that it provides all the great benefits of an RSO with the superior flavor of an OGeez! gummy,” said Peggy’s son and company CEO Bran Noonan. “That’s particularly exciting given the challenge of masking the bitter taste of an RSO.”

RSO, also known as Rick Simpson Oil, is a specialized form of cannabis oil that encompasses all the naturally occurring cannabinoids to give a full-body effect. It was developed by Canadian cannabis activist Rick Simpson, who claims that it successfully treated his skin cancer.

While there is no medical research suggesting that RSO can treat cancer, some antecedal reports indicate that it can provide relief from various symptoms, including those associated with chemotherapy. Peggy experienced many of those symptoms first hand during her four-year battle with Acute Myeloid Leukemia.

Offering RSO in a gummy — rather than as a topical or sublingual — is an exciting development for Arizona’s cannabis consumers. When taking an oil, consumers must eye-ball doses, often by using a syringe. By providing an accurately dosed gummy, the company has removed that guesswork and is making RSO available to a far broader swath of consumers.

While there are other varieties of ratio gummies in the Arizona market combining CBD, THC and other cannabinoids, Peg’s Raspberry Orange RSO is one of the first full-spectrum, whole-plant extracts to be delivered in gummy form in the Grand Canyon State. And like all of OGeez!’s gummies, it is scratch made and fully infused.

Peg’s Raspberry Orange RSO will be offered in a 100 milligram package of 10 gummies. OGeez!’s other indica and sativa gummies currently come in 100 mg, 200 mg and 300 mg options.

Noonan, who took over the company when Peggy passed away in April 2021, said his mission since taking the reins has been to “supercharge OGeez!” in a way that his mother would have been excited about.

As part of that supercharge, the company — which until now has been known as Copia — will officially be renamed OGeez! Brands. It is also rolling out a new lifestyle look on social media, in advertising and on giveaway merchandise.

Peggy was known as one of the matriarchs of Arizona’s cannabis industry and a pioneer who helped grow the market in its early days. Noonan said he was thrilled to be taking OGeez! to the next level and growing it into a “second-generation” company.

“Not only would my mom have been cheerleading for these changes, but she would also have been a huge fan and user of Peg’s Raspberry Orange RSO,” he said. “As the steward of her vision, my goal at the company has been simple — to expand on her mission and carry on her legacy.”

About OGeez! Brands:
As a leading cannabis-infusion company, OGeez! Brands manufactures some of the most in-demand cannabis gummies and vape-cartridge products in Arizona.