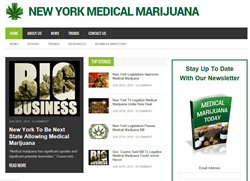 NewYorkMedMarijuana.com is a new website that aims to be a high quality source of information online for medical marijuana news in the state of New York.

According to an article entitled “Emerging Clinical Applications for Cannabis & Cannabinoids” published on NORML.org in January 2014, the University of California Center for Medical Cannabis Research conducted several studies in the past decade that revealed that cannabinoids were able to consistently reduce the nerve pain suffered by patients afflicted by cancer, diabetes, HIV/AIDS, spinal cord injuries, multiple sclerosis, and other similarly debilitating conditions. In fact, the studies indicated that cannabinoids were as good or better than other available medications.

Today, more than twenty other states throughout the United States have legalized marijuana for medical use and allow for comprehensive cannabis and medical marijuana programs. The District of Columbia has also decriminalized the possession of marijuana in small amounts within the nation’s capital, provided that smoking marijuana is done in the privacy of one’s home.

Last year, Washington and Colorado legalized the sale and taxation of marijuana, as well as marijuana use for recreational purposes.

The compromise bill (http://www.mpp.org/states/new-york/) that passed allows individuals to purchase medical marijuana in extracted forms, such as an oil to be used with a vaporizer or an edible pill. Patients, however, are not allowed to smoke marijuana or access it in raw plant form. The bill also limits the conditions that may be treated by marijuana, such as multiple sclerosis, epilepsy, Parkinson’s disease, Lou Gehrig’s disease, Huntington’s disease, cancer, spinal cord injuries, neuropathies, and HIV/AIDS.

This surge of activity in North America has brought about a new era now being referred to as “The Green Rush.” Other states have begun to explore their own versions of marijuana-related legislation. Understandably, numerous sources have sprouted both online and offline – releasing news, features, opinions, and other pieces of information on the booming multi-million dollar industry on a daily basis.

NewYorkMedMarijuana.com sifts through the countless material being written about the increasingly in-demand substance. The site aims to be a reliable online resource for business people and everyday consumers, and strives to provide them convenience by only publishing pertinent and quality information on medical marijuana.