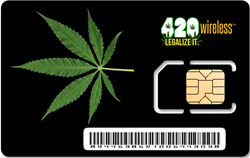 With the majority of voters in the U.S. now in favor of marijuana legalization, 420 Wireless™, a nationwide wireless phone service and prepaid phones provider has become the first telecommunications company to openly join in supporting the cause.

“I think we’re about 10 years away from seeing it fully legalized nationwide, says Steve Kadlec, CMO for 420 Wireless™, “And if we can help that reality come sooner than that, then we’d really be ecstatic. People are opening their eyes to the benefits of this natural plant that have been known to mankind for thousands of years, and everyone should be able to freely make decisions for themselves as to whether it can benefit them or not. We openly support that right.”

With Colorado lawmakers having approved the world’s first banking system designed to accommodate the marijuana industry, many businesses are seeing this as a positive sign to step forward and support an industry. “We think Colorado has been exemplary in providing a model that works and the benefits it has brought haven’t gone unnoticed. Tourism has exploded, additional tax revenues have been collected, and new companies and entrepreneurs are stepping forward to create new businesses and jobs,” says Kadlec.

“There is a lot of room for niche players in this industry and we wanted to fill the telecommunications niche while also supporting the overall cause. 420 Wireless™ is a no credit check, no contract, prepaid cellphone plan service provider. When a 420 Wireless™ subscriber pays their monthly wireless phone bill, 20% of the proceeds are donated to NORML, a pro-marijuana advocacy organization. NORML then uses the funds to lobby state and federal legislators to support legislation in favor of marijuana legalization”, says Kadlec.

He hopes that “this model inspires others to step forward with businesses that can support this burgeoning industry because the voters are having their voice heard. People are starting to listen now”.

Kadlec says he “really believes cannabis legalization will not only help many people but also bring about new industries and new opportunities that can be capitalized on. To illustrate that fact, we have had over 100 prepaid wireless dealers, dispensaries and smoke shops contact us to resell our SIM cards, phone service and prepaid cell phones the first week we made the announcement. Hopefully someone well-known like Cheech & Chong or Snoop Lion will take note and be the face of our company. Either way, this goes to show that the growth potential within the cannabis industry is enormous.”