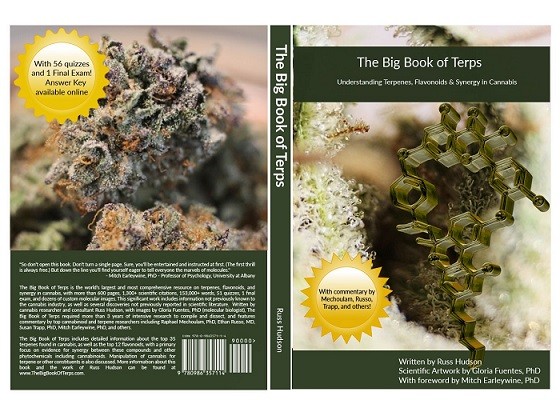 Hudson – a consultant and researcher working in the cannabis industry for several decades – was formerly the subject of a Vice documentary titled “Meet the Guy Who Gets Paid to Smoke Weed,” which focused on Hudson’s consulting work in Europe. But for the last 3 years, Hudson instead focused on the science of cannabis.

“I was tired of the old myths and misconceptions of cannabis,” Hudson said, “when the real magic of this plant is in its molecules.”

Hudson has written other books about cannabis, but said that this latest has been his biggest project yet. With more than 1,300 citations spanning 54 chapters, the book weighs in at 5 pounds and, at least in this regard, lives up to its name.

Mitch Earleywine, PhD, former Chair of NORML (National Organization for the Reform of Marijuana Laws), wrote a strong endorsement of the book in the form of a 3-page foreword: “This book will change you. I have no doubt you’ll find the prose remarkable and the content informative. But more than that, you risk finding yourself a different person when you finish any section.”

“I’m only on page 50 and my entire perspective of plant evolution and our ability to harness terpenes even more effectively has changed.”

Hudson’s work on The Big Book of Terps garnered the attention of leading scientists in cannabis research, including Raphael Mechoulam, PhD – the discoverer of the THC molecule and the endocannabinoid system, Ethan Russo, MD – the world’s leading cannabis synergy and entourage effect researcher, and Susan Trapp, PhD – an expert in the biogenesis of terpenes, with each providing commentary in the ‘Terp Tsars’ chapter of the book.

With a subtitle of “Understanding Terpenes, Flavonoids, and Synergy in Cannabis,” Hudson’s terp tome makes the case for synergy between these compounds and other molecules, particularly cannabinoids, with the concept of synergy advancing the entourage effect theory outside of the realm of the endocannabinoid system.

With readers scrambling to get early copies of Hudson’s book, the author is already planning the next cannabis-related research and work:

“The Big Book of Keys is next, which discusses ketones, esters, and alcohols in cannabis. The more we know about this plant – and the more we keep talking about it – the more accepted it will become.”

Information about Hudson’s terpene textbook can be found at www.thebigbookofterps.com