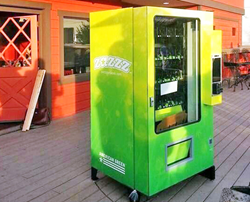 As reported by the Los Angeles Times, Zazzz is of the 21st century says chief operating officer Stephen Shearin of Tranzbyte, the technology company that developed the vending machine. Not only will the contraption be located inside of medical marijuana dispensaries, but will serve as a second verification process by checking user’s identity and age through a strict verification process. Once access has been granted, users will have access to full selections of marijuana products including but not limited to edibles and pre-rolled marijuana joints. Marijuana purchasers can buy their product from the machine with cash, Bitcoin, or a Zazzz card. Since marijuana is still prohibited on a federal level, traditional credit cards are not accepted at this time.

Set to be up and running within a few weeks once regulations are finalized, there have already been two pending orders for additional machines in two states, and ignited interest from others according to the LA Times. The current capacity for production of machines is set at 17 per week if the demand is there. Shearin said he was well aware of the controversies surrounding marijuana use that are surfacing in the state from two recent marijuana related incidents, and wants to work with law officials to ensure his product is not abused. Strict regulation and policies are meant to be enacted that will keep minors and users under the age of 21 away from the legalized medication. The issue of minor and adolescent abuse has been surfacing recently in the public. Certain Marijuana Packaging companies such as A&A Packaging, a packaging company in the same industry as Zazzz, specializing in high quality marijuana packaging for dispensaries and recreational users knows the strict compliance issues all to well.

An A&A Packaging spokesperson commented on this idea as being “innovative and beneficial to increase the security of marijuana sale to adults only.” Since marijuana had been legalized on January 1st, 2014, A&A Packaging has since made it a goal to keep up with all changes in Colorado’s marijuana packaging laws so that they can provide customers with state compliant packaging set by Colorado’s Department of Revenue. According to an A&A Spokesperson, one of the major issues faced with packaging and sales requirements is to prevent incidents involving children and minors. A&A fights this problem by making sure all their dispensary packaging bottles, vials, and jars are tested to the standards set by the ASTM and CPSC.

A&A Packaging is the nation’s largest supplier in marijuana dispensary and recreational packaging supplies and only carries compliant packaging that meets the requirements of each individualized state. To see how A&A Packaging could help your business with new marijuana packaging compliance laws, visit their website athttp://www.marijuanapackaging.com or call them at (888) 315-2453.