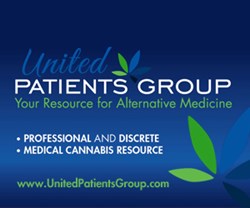 United Patients Group today announced a call for research into the therapeutic effects of cannabis extracts in cancer, given the growing and clear evidence indicating cannabis has anticancer effects in humans. They are urging known philanthropists and individuals interested in cancer breakthroughs to help fund clinical trials of the cancer-destroying power of cannabis extracts.

“A number of recent studies have shown that medical cannabis does much more than improve patient’s symptoms—it may, in fact, be a substantial anticancer treatment itself,” said John Malanca, founder and owner of United Patients Group, a trusted news source and advocate for medical cannabis patients. “Yet the federal government ignores these studies and refuses to fund research in this area (even though they hold a patent on cannabis as a therapeutic treatment – US Patent #6630507.

Because of this, we’re calling on individuals who are dedicated to saving lives to jump-start more research into these medicinal compounds that hold tremendous potential.

“Philanthropic individuals, we are in need of your help in fast-tracking this research. The government refuses to see what’s already evident: that cannabis extracts can kill cancer cells. So we’re asking people like Sir Richard Branson, Sara Blakely, John Paul DeJoria, Ted Turner, George Lucas, Bill Gates, Michael Ashcroft, Dan and Jennifer Gilbert, and other powerful advocates of human health to fund rigorous scientific research into these compounds that could potentially save millions of lives,” he urged.

A recent blog post, entitled, “Cannabis Extract Treatment for Terminal Acute Lymphoblastic Leukemia” on UnitedPatientsGroup.com collects some of the groundbreaking studies that have demonstrated that certain cannabis compounds damage and kill cancer cells. These studies include the following:

Anecdotal evidence of the incredible healing powers of cannabis is compelling. Dr. Stanley Rutner went from ten days to live to “No Evidence of Cancer” when he began taking cannabis oil in a daily regimen.

Cash Hyde, a four-year-old with brain cancer, was brought back from the brink of death several times by cannabis oil, but he ultimately succumbed when his family was unable to obtain enough oil to keep his treatment going.

This overwhelming evidence of the power of cannabis to treat cancer has lead doctors to call for further research. Dr. Yadenver Singh and Dr. Mansoor Foroughi, authors of the referenced studies in Case Reports in Oncology and Child’s Nervous System, respectively, and the latter a recipient of the 2013 Braakman award from the European Association of Neurological Surgeons, each concluded that clinical trials should be undertaken.

Dr. Raphael Mechoulam, the iconic Israeli researcher who discovered tetrahydrocannabinol (THC) in 1964, and whose lab discovered the first endocannabinoid anandamide in 1992, strongly suggests that such trials “should be planned and undertaken as soon as possible.”

Dr. Sunil Aggarwal, a 2014–15 Clinical Fellow in Hospice and Palliative Medicine at the National Institutes of Health Clinical Center, joins this call for research.

“For the good of the human race, we ask these powerful individuals, who have shown their dedication to easing human suffering, to step up and help fund these clinical trials and for government to facilitate this important research,” implored Malanca.

For more information about this topic, visit UnitedPatientsGroup.com or call (415) 524-8099.

While most online medical marijuana sites cater to patients already familiar with medical marijuana, the UnitedPatientsGroup.com website is a comprehensive and easy-to-use information source for people of all ages and experience levels, from novice medical cannabis users to experienced industry professionals. The site’s News, Resource, and Blog pages introduce new patients to the ins and outs of medical marijuana healthcare, while helping experienced providers stay abreast of the latest developments in THC and CBD therapies.