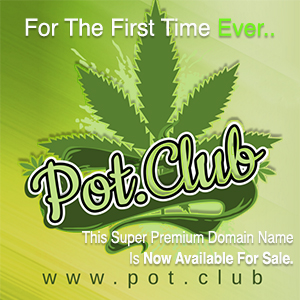 LAS VEGAS, NV and FORT LAUDERDALE, FL  – January 6, 2016 – /MJbizwire/ – For anybody wanting to own what could potentially be one of the hottest online destinations in the North America’s fastest-growing industry, now is the time to grab it as the domain name Pot.club will sell to the highest bidder at the upcoming NamesCon/RightOfTheDot/NameJet Live and Online Auction to be held next week in Las Vegas on January 11, 2016.

The marijuana industry is projected to grow to a $35 Billion marketplace in the United States by 2020 as the Federal government and more states lean towards full legalization, according to Green Wave Advisors.  The term “Pot Club” gets more than One Million queries on Google each month globally, and it’s already been proven that Web addresses with keywords to the left of the dot using the .club extension have led to significantly higher organic search results.

“We’ve already sold Marijuana.club and MJ.club, and now Pot.club is the last great single-word  .CLUB domain available in this space, so whoever gets it will be very lucky to own such valuable online real estate,” said Colin Campbell, president and CEO of .CLUB Domains.  “The word club represents passion and community, and there are many new and growing communities being established around the pot culture now that legalization is spreading across North America.  Pot.club is a premiere name for any marijuana and cannabis-related business.”

Pre-bidding for the online action is underway now at Namejet.com or by clicking here.   The live and online auction is slated for January 11, 2016 at the Tropicana Hotel in Las Vegas as part of The RightOfTheDot™ Premium Live and Online Auctions taking place at the NamesCon Conference.   Additional .club domain names set for auction include:

More information about each name can be found at http://nic.club/auction/

Led by Internet entrepreneur Colin Campbell, whose prior successes include Tucows Interactive and Hostopia.com, .Club Domains, LLC was formed for the purpose of becoming the .CLUB gTLD registry.  The company recently launched Startup.club to support entrepreneurs building businesses around a .CLUB domain name. With more than 550,000 domain names sold to date .CLUB leads the pack of new domain extensions in sales and usage. More information and links to register .CLUB domains are available now at http://www.get.club.