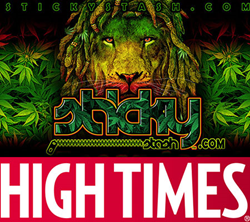 StickyStash.com first launched the new line of products at the 2014 Cannabis Cup in Denver, CO. “The co-branded High Times StickyStash™ apparel was a huge success with attendees of the Cannabis Cup. Being at the event created great exposure for our brand. The demand for the new High Times Vapor Tees is incredible!” states Scott Coltune, President and CEO of Sherry Mfg, the parent company of StickyStash.com.

To commemorate High Times’ 40th year in business, StickyStash™ created a special line of apparel designs such as “Hanging with my Buds” that features the “40 Years” High Times logo. Over the past 40 years, High Times has been the cornerstone of the marijuana industry, providing legendary interviews with notable figures such as Hunter Thompson, William S. Burroughs, Bob Marley, Oliver Stone and Jorge Cervantes. To celebrate, High Times’ 40th year issue hits newsstands on Oct 1. The special 40-year anniversary issue will tie into events going on in NYC in the fall of 2014 (late Sept./early Oct.).

“High Times always looks for ways to bring our people the very best and our Vapor Tee line is a great example of our commitment to quality. We are excited to include StickyStash™ to our list of trusted partners that includes other brands such as Cheech & Chong,” says Sarah Muhlrad, Products and Licensing Manager at High Times.

Fans of High Times are able to purchase the new Officially Licensed Apparel online at StickyStash.com/hightimes.

Be sure to get the Best of High Times: Greatest Hits special 40-year anniversary collector’s issue that includes some of our favorites from the archives. On newsstands until June 23rd.

Established in 1948 by Quentin Sandler, Sherry Mfg. is located in Miami in a state-of-the-art 275,000 square foot facility where it handles all production and marketing for licensed products. Thanks to an extensive worldwide network, the company distributes nationwide to resorts, theme parks and airport retailers under the brands of Sherry Resortwear.

High Times is a New York-based monthly national magazine founded in 1974 by Tom Forçade. The publication is devoted to and advocates for the legalization of cannabis. High Times has been the world’s number one resource for cannabis information, culture and reports from the War on Drugs for 40 years. Past contributors include Charles Bukowski, Patti Smith, William S. Burroughs, Truman Capote, Debbie Harry, Hunter S. Thompson, Andy Warhol, Peter Gorman, Bill Weinberg and Jon Gettman.