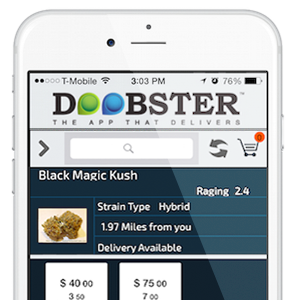 A Dispensary Locator.  Product Pre-Order and Pick-Up.  Professional, Discreet and Timely Product Delivery to Your Location.

Calif., Aug. 27, 2015 /MJbizwire/  – In mid-May, Logistics Trust, Inc. (“Logistics Trust”) announced its plans to enter the exploding legal marijuana industry with the launch of its Doobster Platform, a HIPAA-compliant mobile application and website that allows medical marijuana patients and adult consumers of legal marijuana to order products from their smart phones and tablets.  Well, Doobster, “The App That Delivers!” is here!  You can download the Android version of the Doobster App today on the Doobster web site at http://doobster.org/ .

Logistics and compliance is at the core of the Doobster platform.  Doobster does not grow, produce, process, distribute or sell marijuana or marijuana products.

Doobster is Truly a First.

The multi-faceted functionality of the Doobster App is tied to the status of the law in each State.  That is a capability that no other on-demand App has ever offered in the U.S. cannabis industry.

Users of the Doobster App can only register from geographic locations within U.S. territories that have legalized cannabis for medical or adult use.  The Doobster website http://doobster.org/ is accessible from anywhere.

By and large, Doobster has been a bootstrap endeavor.  Activation of the Doobster vision did not start with thousands of dollars in the Company coffer.  Now, the Company is about to launch a SEC Rule 506 (c) equity offering, targeting accredited investors and $5 million.

Since many local ordinances limit the number and visibility of marijuana storefronts, the Doobster Platform enables vendors and consumers to communicate via a smart phone or tablet device to execute a State-sanctioned legal marijuana purchase without the need to drive to dispensaries or wait in long lines to transact business.  Alternatively, pre-order and pick-up is an option for consumers who are on the go and want to avoid wait times.

One of several distinguishing factors for Doobster is its use of a licensee model to open new State territories and State-authorized dispensaries to adopt the Doobster Platform.  Within the next 12months, Doobster intends to operate in 24 U.S. territories.  As sales of legal medical and recreational marijuana spreads to other States, Doobster will expand as well.
Licensees at the State-level (as well as districts within States) serve as Doobster authorized representatives, complimenting the Company’s internal sales and customer support teams.  “Development of a Platform in multiple cities and States is a testament to the versatility of this APP” says Michael Watorski, vice president of licensing and sales.  He adds, “Our licensee model offers an ideal opportunity for business-savvy individuals to enter the exploding legal marijuana industry without having to handle the product. We believe localized – personal – relationship – management will pave the way to fruitful success. We’re a technology, logistics and compliance facilitation company.”  Anyone interested in purchasing a State or district license can simply go to the Doobster website at www.doobster.org or call
1-800-219-2797.

Allowing the ownership of the State or district licensing rights to the Doobster Platform is another first that Doobster is introducing into the cannabis industry.  There is simply no other company in the industry that offers qualified entrepreneurs the ability to operate a turn-key cannabis technology business.

Doobster is actively planning more proprietary modules and seeking partnerships as a open API system that will allow other developers to integrate their applications into the Doobster Platform.  Although today we are laser focused and have delivered a top quality product that is available in all legal States.  Additional enhancements of Doobster Platform will include grower to dispensary services, social media functionality and creation of a true commodities market for cannabis by State and other incredible features.  Doobster intends to be responsive to its customers needs and desires for the Platform

Google Play Has Placed a Speed-Bump.

The Google (GOOG) Play App Store has placed a speed-bump in the path of the Doobster App release.  Google Play has denied listing the Doobster App in its app store, but not for reasons related to the quality or functionality of the Doobster App.  Doobster was approved by Google for a short time on August 6, 2015, but then was suspended hours later.  Google cited internal compliance concerns regarding the legality of marijuana across the U.S as the reason for the suspension.

Needless to say, Doobster is frustrated with the Google Play decision.

Google Play is denying access to the Doobster App to a large segment of smart phone users in the U.S. who use Android devices.

Google Play instructs app developer to “Keep it legal. Don’t engage in unlawful activities on this product.”  Abadjian says, “We’ve done everything possible to ensure that we support the delicate balance between State legalization and federal law enforcement.”  He goes on to say, “Our app can only be used by individuals’ who meet State law eligibility requirements, and only at locations that are within a State that has legalized cannabis for medical or adult use.  Even if a user registers to use our app in a legal State, they will not be able to travel to a non-legal State and use the app.  We set this limitation in our technology specifically to support the commitments of Google Play and Apple to avoid the facilitation of illegal activities.  It also fits our mission to be a leading-edge logistics and compliance facilitation company.  We firmly believe that the future success of the legal marijuana industry is tethered to safe, responsible and legal use of cannabis products.”

“We have great respect for Google Play, and we are not asking for any special treatment.  Let the market dictate our success.  We simply ask Google Play to respect the law of the land and allow their customers to download our Doobster App as they so choose.  We’re excited about the opportunities and challenges ahead,” adds Darryl K. Henderson, J.D., chief operations officer.

So, Doobster is Here!

Download the Android version of the Doobster App at www.doobster.org.  Doobster looks forward to offering the IOS version of its app through the Apple App Store soon.

Based upon the growing public interest in on-demand mobile apps, this is undoubtedly a concept that has begun to grow roots in the U.S. legal marijuana industry.

Doobster® is the registered trademark of Logistics Trust, Inc.