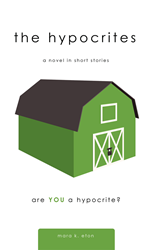 Small towns usually hold the biggest secrets. Behind the friendly smiles and the well-kept lawns of Hempstead, Kansas is a large cannabis underground. “The Hypocrites: A Novel in Short Stories” by Mara K. Eton exposes the gritty inner workings of the town’s secret cannabis operations by compiling the stories of Hempstead residents who are more connected than they realize because of their cannabis habits. “The Hypocrites” is available everywhere books are sold.

“The Hypocrites” opens with Sean DeGraff, a woman who works at Tech Temps and has a knack for placing fellow smokers in jobs that do not require drug tests. Sean begins an affair with Sam Novak, a pill-popping con artist, and when the relationship goes sour, Sam’s rage causes him to set off a chain of events that entwine the lives of seven Hempstead residents.

Along with Sean and Sam, “The Hypocrites” tells the story of Mya, who buries her wealth behind sarcasm; Penn, a complacent weed dealer; Ina, an IT worker; Bob, a cautious procurer who distributes his goods in taxidermy raccoons; and Jody, an artistic vandal also after Sean’s heart. They are all members of the town’s marijuana smokers support group, but they discover their connection goes beyond the weekly meetings.

The drama that unfolds in Hempstead is told through seven points of view, giving all characters the opportunity to tell their version of the events and provide backstory on how they became involved in each other’s lives. In the short stories of “The Hypocrites,” Mara K. Eton tells a wild tale full of love and hate, hidden histories, and dreams of the future. While cannabis plays a large role in the novel, the core of the story is human connection.

Mara K. Eton lives in the Southeast United States and enjoys living close to the coast after spending many years in the Midwest and Europe. Mrs. Eton studied creative writing as a scholar at the South Carolina Governor’s School for the Arts and has published a literary fanzine while living in the Midwest. “The Hypocrites” is her first novel.