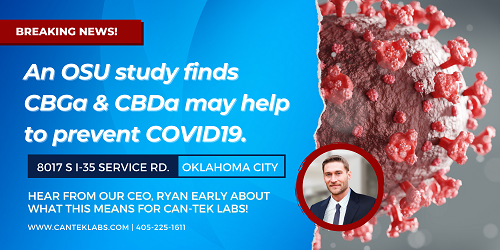 Oklahoma City, OK – February 2nd 2022 A recent article featured in Forbes has revealed that some of the components of Hemp could potentially prevent COVID-19’s spread and physical impact based on a study conducted at Oregon State University led by Richard van Breemen – researcher for Oregon State’s Global Hemp Innovation Center in the College of Pharmacy, and Linus Pauling Institute. The two components, Cannabigerolic acid or CBGA and Cannabidolic acid or CBDA, cling to the COVID-19 spike protein in order to prevent the virus from having the capabilities to infect healthy cells. This very spike protein is the same one targeted when an individual receives a COVID-19 vaccine or antibody therapy. Breedmen states that “These cannabinoid acids are abundant in hemp and in many hemp extracts. They are not controlled substances like THC, the psychoactive ingredient in marijuana, and have a good safety profile in humans.”

Although the usage of CBDA and CBGA is not guaranteed to prevent viral infection, and the potential for resistant variant development is possible, Breedmen believes that the combination of vaccination, as well as CBDA and CGDA treatment, should present a more antagonistic environment for the virus. When Ryan Early, owner and founder of Can-Tek Labs and Hempyre Genetics discussed the effects of CBDA and CBGA, he stated “ Can-Tek Labs is excited that we are able to provide these cannabinoids and have already started our development of a specific ratio of these specific minor cannabinoids, CBDA and CBGA back in 2019. During “Project Hemp for Victory” we also acquired two high-yielding CBGA and CBDA hemp plants that we have dedicated our research farm to growing and greenhouses are already filled!”

Can-Tek Labs was Oklahoma’s first cannabis company as well as raw goods manufacturer, ingredients provider, and compounding manufacturing facility known for its production of high-quality hemp-infused products. Hempyre Genetics is an advanced hemp research and development company that stays compliant with the enforcement of the Hemp growing and production standards required by the US 2018 Farm Bill. In 2018, Hempyre Genetics’ new “Project Hemp for Victory ” was set into motion, in which Ryan and his team traveled across the state of Oklahoma in an attempt to recover genetics leftover from Industrial Hemp Farming during World War II. Early states, “We set out in an attempt to identify new characteristics, certain terpene and cannabinoid compounds, ratios of those specific compounds, as well as textiles and manufacturing components. Some of those genetics were extremely unique and contained rare minor cannabinoids.”

Early discussed his development of a hemp oil tincture that coincides with the released information of Breedmen’s study. He further explained that “Utilizing both genetics, we’re producing products with proprietary ratios of CBD with CBDA and CBGA-rich components.” Further and much-anticipated research is in the works from both companies for all the potential CBDA and CBGA have to offer and many other lesser-known cannabinoids yet to be researched.

Join us on our upcoming live session as our CEO and founder, Ryan Early discusses what this news means for Can-Tek Labs and American Wholesale Hemp. To learn more visit www.canteklabs.com