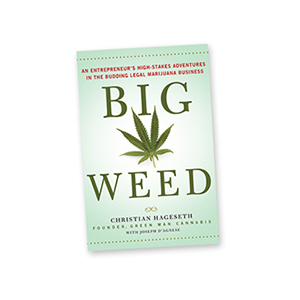 Through his book Hageseth, whose entrepreneurial career began 20 years before he opened his first marijuana dispensary, paints a colorful picture of the trials and tribulations faced from first joining the marijuana industry in 2009, to becoming a two-time winner of the Cannabis Cup, to most recently seeing his dream for the world’s first weedery start coming to fruition. As the owner of one of the most successful and fastest growing legal marijuana businesses in the United States, his unique story will help to shape the way entrepreneurs – or “ganjapreneurs” – throughout the country face this industry and its unique challenges as its landscape continues to evolve over time.

“Whatever the reader’s views on the subject, this is an ideal insider’s look at an industry in a time of momentous change,” Publisher’s Weekly states in its February 2, 2015 issue. Kirkus Reviews, in its February 15, 2015 issue, describes Hageseth as “an old-school drug warrior’s worst nightmare: an affable, articulate venture capitalist who argues that correcting prohibition’s folly will benefit both investors and society at large.” The publication describes the book as “An accessible primer on the capitalistic opportunities presented by this vice gone suddenly mainstream.” Jake Browne, Pot Critic for The Cannabist, says of Hagesth’s book, “The fascinating highs and lows of both a man and a movement, Hageseth’s story is essential reading on the new marijuana economy.”

Industry critics are not the only ones reveling in Hageseth’s story. Amazon’s customers have given “Big Weed” an average rating of 5 out of 5 stars through Amazon’s Amazon Vine program. Amazon Vine is Amazon’s invitation-based board of most trusted customer reviewers. Customers are selected based on their reviewer rank to post opinions about new and pre-released items, to help their fellow customers make informed purchase decisions.

Hageseth will conduct a book tour during April 2015, through which he will promote his book, and in doing so help to continue the ongoing conversation around marijuana legalization and industry best practices. He will make appearances in Denver, CO, San Francisco, CA, Portland, OR, Seattle, WA, New York, NY, and Los Angeles, CA. He is also available for interviews and speaking events.

“Big Weed” will be available for purchase on April 21, 2015, but copies can be preordered now from Amazon, Barnes & Noble, Indiebound, or any other online book retailer. For more information about “Big Weed: An Entrepreneur’s High Stakes Adventures in the Budding Legal Marijuana Industry” or to schedule an interview or speaking engagement with Christian Hageseth, please send an email to press(at)americancannabispartners(dot)com.

About Christian Hageseth
“Big Weed” author Christian Hageseth is an entrepreneur and a visionary. He is the CEO of American Cannabis Partners and President and Chairman of Green Man Cannabis, LLC, a two-time winner of the Cannabis Cup – the marijuana industry’s highest award for product excellence. He is also creator of the Green Man Cannabis Ranch & Amphitheater, the first weedery in the world, scheduled to open its doors in Fall 2015. Mr. Hageseth has worked in the marijuana industry full time since July 2009 when he founded TGM Beneficial Care, LLC, the predecessor company of Green Man Cannabis, LLC. He has been a long time advocate for the liberalization and legalization of marijuana, pushing for heightened public education and awareness of the industry and its realities. He currently lives in Denver, CO.